Résumé : Everyone likes Humaira « Hani » Khan—she’s easy going and one of the most popular girls at school. But when she comes out to her friends as bisexual, they invalidate her identity, saying she can’t be bi if she’s only dated guys. Panicked, Hani blurts out that she’s in a relationship…with a girl her friends absolutely hate—Ishita « Ishu » Dey. Ishu is the complete opposite of Hani. She’s an academic overachiever who hopes that becoming head girl will set her on the right track for college. But Ishita agrees to help Hani, if Hani will help her become more popular so that she stands a chance of being elected head girl.

Despite their mutually beneficial pact, they start developing real feelings for each other. But relationships are complicated, and some people will do anything to stop two Bengali girls from achieving happily ever after.

Résumé : For cynical twenty-three-year-old August, moving to New York City is supposed to prove her right: that things like magic and cinematic love stories don’t exist, and the only smart way to go through life is alone. She can’t imagine how waiting tables at a 24-hour pancake diner and moving in with too many weird roommates could possibly change that. And there’s certainly no chance of her subway commute being anything more than a daily trudge through boredom and electrical failures.

But then, there’s this gorgeous girl on the train.

Jane. Dazzling, charming, mysterious, impossible Jane. Jane with her rough edges and swoopy hair and soft smile, showing up in a leather jacket to save August’s day when she needed it most. August’s subway crush becomes the best part of her day, but pretty soon, she discovers there’s one big problem: Jane doesn’t just look like an old school punk rocker. She’s literally displaced in time from the 1970s, and August is going to have to use everything she tried to leave in her own past to help her. Maybe it’s time to start believing in some things, after all

Résumé : When Nozomi Nagai pictured the ideal summer romance, a fake one wasn’t what she had in mind.

That was before she met the perfect girl. Willow is gorgeous, glamorous, and…heartbroken? And when she enlists Nozomi to pose as her new girlfriend to make her ex jealous, Nozomi is a willing volunteer.

Because Nozomi has a master plan of her own: one to show Willow she’s better than a stand-in, and turn their fauxmance into something real. But as the lies pile up, it’s not long before Nozomi’s schemes take a turn toward disaster…and maybe a chance at love she didn’t plan for.

Résumé : Waylon Russell Brewer is a fat, openly gay boy stuck in the small West Texas town of Clover City. His plan is to bide his time until he can graduate, move to Austin with his twin sister, Clementine, and finally go Full Waylon, so that he can live his Julie-the-hills-are-alive-with-the-sound-of-music-Andrews truth.

So when Clementine deviates from their master plan right after Waylon gets dumped, he throws caution to the wind and creates an audition tape for his favorite TV drag show, Fiercest of Them All. What he doesn’t count on is the tape accidentally getting shared with the entire school. . . . As a result, Waylon is nominated for prom queen as a joke. Clem’s girlfriend, Hannah Perez, also receives a joke nomination for prom king.

Waylon and Hannah decide there’s only one thing to do: run—and leave high school with a bang. A very glittery bang. Along the way, Waylon discovers that there is a lot more to running for prom court than campaign posters and plastic crowns, especially when he has to spend so much time with the very cute and infuriating prom king nominee Tucker Watson.

Waylon will need to learn that the best plan for tomorrow is living for today . . . especially with the help of some fellow queens. . . .

Résumé : Contrary to popular belief, best friends Kate Garfield and Anderson Walker are not codependent. Carpooling to and from theater rehearsals? Environmentally sound and efficient. Consulting each other on every single life decision? Basic good judgment. Pining for the same guys from afar? Shared crushes are more fun anyway.

But when Kate and Andy’s latest long-distance crush shows up at their school, everything goes off script. Matt Olsson is talented and sweet, and Kate likes him. She really likes him. The only problem? So does Anderson.

Turns out, communal crushes aren’t so fun when real feelings are involved. This one might even bring the curtains down on Kate and Anderson’s friendship.

Résumé : There’s one thing Jay Collier knows for sure—he’s a statistical anomaly as the only out gay kid in his small rural Washington town. While all this friends can’t stop talking about their heterosexual hookups and relationships, Jay can only dream of his own firsts, compiling a romance to-do list of all the things he hopes to one day experience—his Gay Agenda.

Then, against all odds, Jay’s family moves to Seattle and he starts his senior year at a new high school with a thriving LGBTQIA+ community. For the first time ever, Jay feels like he’s found where he truly belongs, where he can flirt with Very Sexy Boys and search for love. But as Jay begins crossing items off his list, he’ll soon be torn between his heart and his hormones, his old friends and his new ones…because after all, life and love don’t always go according to plan.

Résumé : Noah Ramirez thinks he’s an expert on romance. He has to be for his popular blog, the Meet Cute Diary, a collection of trans happily ever afters. There’s just one problem—all the stories are fake. What started as the fantasies of a trans boy afraid to step out of the closet has grown into a beacon of hope for trans readers across the globe.

When a troll exposes the blog as fiction, Noah’s world unravels. The only way to save the Diary is to convince everyone that the stories are true, but he doesn’t have any proof. Then Drew walks into Noah’s life, and the pieces fall into place: Drew is willing to fake-date Noah to save the Diary. But when Noah’s feelings grow beyond their staged romance, he realizes that dating in real life isn’t quite the same as finding love on the page.

Résumé : Sky Baker may be openly gay, but in his small, insular town, making sure he was invisible has always been easier than being himself. Determined not to let anything ruin his senior year, Sky decides to make a splash at his high school’s annual beach bum party by asking his crush, Ali, to prom—and he has thirty days to do it.

What better way to start living loud and proud than by pulling off the gayest promposal Rock Ledge, Michigan, has ever seen?

Then, Sky’s plans are leaked by an anonymous hacker in a deeply homophobic e-blast that quickly goes viral. He’s fully prepared to drop out and skip town altogether—until his classmates give him a reason to fight back by turning his thirty-day promposal countdown into a school-wide hunt to expose the e-blast perpetrator.

But what happens at the end of the thirty days? Will Sky get to keep his hard-won visibility? Or will his small-town blues stop him from being his true self?

Cool for the summer – Dahlia Adler

Résumé : Lara’s had eyes for exactly one person throughout her three years of high school: Chase Harding. He’s tall, strong, sweet, a football star, and frankly, stupid hot. Oh, and he’s talking to her now. On purpose and everything. Maybe…flirting, even? No, wait, he’s definitely flirting, which is pretty much the sum of everything Lara’s wanted out of life.

Except she’s haunted by a memory. A memory of a confusing, romantic, strangely perfect summer spent with a girl named Jasmine. A memory that becomes a confusing, disorienting present when Jasmine herself walks through the front doors of the school to see Lara and Chase chatting it up in front of the lockers.

Lara has everything she ever wanted: a tight-knit group of friends, a job that borders on cool, and Chase, the boy of her literal dreams. But if she’s finally got the guy, why can’t she stop thinking about the girl?

Some Girls Do – Jennifer Dugan

Résumé : Morgan, an elite track athlete, is forced to transfer high schools late in her senior year after it turns out being queer is against her private Catholic school’s code of conduct. There, she meets Ruby, who has two hobbies: tinkering with her baby blue 1970 Ford Torino and competing in local beauty pageants, the latter to live out the dreams of her overbearing mother. The two are drawn to each other and can’t deny their growing feelings. But while Morgan–out and proud, and determined to have a fresh start–doesn’t want to have to keep their budding relationship a secret, Ruby isn’t ready to come out yet. With each girl on a different path toward living her truth, can they go the distance together? 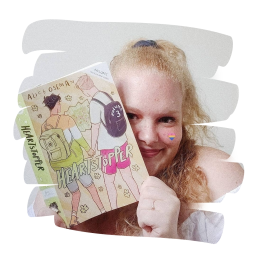 Tiffany has
read 0 books toward
her goal of
150 books.